Although the popular description of the Open-Domain QA centers on the fact that the questions are not limited by a specific domain, this is not totally correct unless the term domain is used in the philosophical sense of a sphere of knowledge, influence, or activity, which is listed as 'sense #4' in the Merriam-Webster's dictionnary.

However, the term domain may also have a mathematically sounding meaning of a ...set of elements to which a mathematical or logical variable is limited; specifically : the set on which a function is defined. See 'sense #5' of the same dictionary. In this case, it can be said to be equivalent to the CS term data.

As evaluation conferences like TREC teach us, there is always a fixed amount of input data for a QA system. Which means that every QA system participating in TREC is to be called a closed-domain system if the term domain is used in its 5th sense.

An old software project management axiom, otherwise known as Conway's law stated that any piece of software reflects the organizational structure that produced it. Forty years after Melvin Conway formulated it, it has been empirically validated by a team of Harward Business School researchers.

They compared several software products, including open-sourced and closed-sourced ones, and concluded that distributed teams tend to develop more modular products.

According to ONEM, there's been 53 mln service vouchers sold in Belgium in 2007.

Everyone and his friends are afraid of calling the langue and parole concepts of Saussure by their English names.

After giving in some thought and trying different translations in the discussions, I came out with language and discourse and the optimal translations. Feel free to criticize.

Tired of trying to fix a bug that resulted in the display of an empty blank area instead of a floating image, I run to the best developer's friend which gave me an answer, no explanation attached.

Now what the heck is the logic behind the bug and, especially, its fix? God knows.

P.S. I bought a beer for the author. This bug pissed me off for a whole month.

The most dangerous outcome of the underplanning is employee frustration. Without clear day-to-day targets, employees loose interest in the work. Some become anxious, not willing to take on responsibilities beyond what they consider their assignment.

The danger of the overplanning is that detailed plans are hard to change.

The rigidness of the plan is proportional to the time spent on it, as the only reason not to change plans is often sheer inertia of those that invested already a lot of time to write it up, in the first place.

An ideal planning phase is short and concise, and the planing granularity is barely sufficient to distribute the day-to-day assignments to the employees.

The employee should be given as much control over his work as he can bear. This meets the requirement for the planning in that there should be just enough planning to induce day-to-day tasks, no more.

More freedom brings more responsibility and emotional involvement, by creating a sense of ownership between the employee and the product.

The freedom may morph into frustration if the employee takes on the challenges he can not endure. 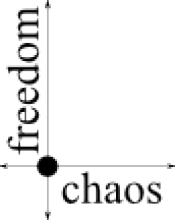 A project manager plays with two major forces: Chaos and Freedom. When a project starts, nothing is clear, the previous stages like business analysis and user requirements collection have likely been a complete failure and collected input won't help much the team and the manager. At this point, the manager has to control the Chaos and reduce it to the minimum, by creating an environment where everyone know exactly what to do, how to do it and how much time would it take.

So he starts to plan, as the work moves on. The days roll out, and he slowly realizes that there is not much left of the initial planning, and the team is swirling out in different directions. This is where the Freedom control takes precedence. The manager has to give everyone enough Freedom so that every morning employees felt the urge to scratch an itch, while still working in the planned direction.

He slowly realizes that the Chaos/Freedom ratio is unique for each employee, and he has to work out a personal approach to everyone if the wants the team to work at full throttle.

By the time everything is crystal clear in his mind, and all the errors have been consumed and learned from, the project ends, and the manager moves on the next one or bails out.