We've already seen it in 2009. The European Commission could have built an exemplary anti-trust case against Microsoft for forcing manufacturers to bundle its operating system with the computers. Instead, it targeted a smaller issue of tying the web browser to the operating system. Since then, Microsoft lost the browser war on technical grounds, and Internet Explorer became known as a tool to download Google Chrome on a fresh computer. The only real impact of the 2009 Commission's decision on consumers was negative. A sudden drop in the quality of email rendering in Microsoft Outlook 2010 and all the later versions comes from the fact that Microsoft teared off the Internet Explorer's component from Microsoft Office and replaced it with a much older and less capable library developed in the early 80s and initially used to display RTF documents. So, whenever you see bulky fonts and ugly formatting in your Microsoft Outlook, don't blame the sender, blame the European Commission. This old story repeats with Google. They took on an irrelevant issue of Google Shopping search results, instead of picking one of the well-publicized issues of: * abuse of control over the Android ecosystem * Gmail interoperability with small independent mail servers * Gtalk and Google Hangouts interoperability with third-party XMPP servers * Google Single Sign-On interoperability with regards to industry standards …the list can go on and on.
Tags:
EU
microsoft
google

Among the multitude of programming APIs provided by Google lies a jewel called Prediction API. It has a high-quality classifier that allows for continuous learning with model updates.

Let's quickly use it to automatically sort incoming mail into your existing labels. The most tedious part is configuration:

We are done configuring. Now, there are only two functions to implement: one to train the model and the other to classify incoming mail.

The function GmailApp.getUserLabels() ❶ gets all labels that you defined in Gmail and disregards standard labels such as Inbox, All Mail or Spam. Mails in Gmail are organized by threads, so once you get a handle on a label, you have to get all of its threads ❷, then grab individual mails under that thread. We'll use the first email of a thread for this simple exercise ❸.

If the only thing that keeps you from closing your Google Account is Calendar, here's the solution: setup your own CalDav server. I've chosen radicale. The setup is easy, but pam support is broken in Debian wheezy, so I had to fix it the following way:
Tags:
google
Two main sources of my inspiration were this post by Daniel P. Berrangé and this very detailed HOWTO on Debian User Forums. There's also a great, albeit a bit stripped down rootfs from Vassilis Laganakos for those who don't want to bother using debootstrap. Here's my script to run in root shell on ChromeOS to put the signed kernel onto the SD card: Note the use of --oldblob option -- newer ChromeOS does now mount /boot anymore, but HOWTOs out there still suggest to point to the kernel using --vmlinuz . Also, lsm.module_locking=0 is important. Without it, you won't be able to load kernel modules in Debian.
Tags:
google
sysadmin 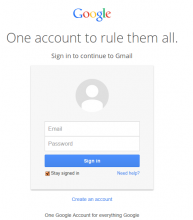