How Lenovo, Dell, HP and Fujitsu messed up with their most lucrative clients for 1½ years 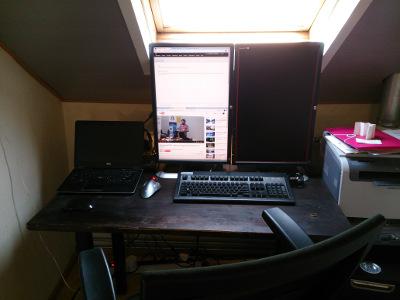 It's not a coincidence that notebook docking stations are being sold only with high-end laptops. My Dell e7740 costs over 2000 €. When I bought it in January 2014, I couldn't imagine I'll have trouble making it work under Linux. After all, it was all-intel, already well-supported hardware. The trouble came from a usually dumb piece of hardware: the docking station. I run two 1920x1200 screens in portrait mode, but this freaking docking station"intelligently" merged the two screens into a virtual 3840x1200 screen and presented just that to the notebook.

The bug-o-feature responsible for this is called Displayport Multi-Stream Transport and it was intended to drive multiple displays via one cable using daisy-chaining. When first docking stations with MST support appeared by end 2013, none was prepared for it. It took well over a year before MST support landed in mainline 3.17 kernel. And it will take another year until all major distributions move to 3.17 and past it.

Red Hat itself found it out only when they run into the problem, and it took 6 months before David Airlie came up with a patch to fix this hardware bug. Check out this talk for a good overview of the story.