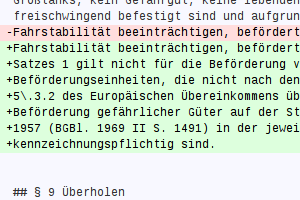 Software that we now use constantly in our daily life wouldn't be possible if people creating these systems did not follow the practice of recording even the smallest change to the software in version control systems. Now, political activists all around the world convert legal texts to version control systems in an attempt to open up the lawmaking processes.

Laws are written very much like software. Once the first version is created,  subsequent revisions are applied to it, producing amendments or even full laws whose only purpose is to modify the previous versions. Unlike software, revisions of laws are consolidated outside of the legal process, sometimes only by private firms that charge money for access to the consolidated law. To exacerbate the problem, consolidated laws have usually no legal value, requiring armies of legal assistants to iterate over individual revisions while drafting new legislation or writing court orders.

Enter the relam of the software industry. It invented version control systems circa 1972, and they are now used whenever there is  software to be developed, be it for a deep space mission or for an online pizza delivery system. Our readers may be acquainted with the Track Changes feature of Microsoft Word. Other, more powerful version control systems allow to record  subsequent changes to hundreds of thousands of documents, instantly merge and compare as well as to see how a document looked like at a certain point back in time, all of that while operating on data of the size of Library of Congress.

Back in 2007, Tim O'Reilly, the founder of the Oreilly Media published an article entitled "Why Congress Needs a Version Control System". It took several years until attempts to put laws into version control system were made.

There are now several projects in progress. La Fabrique de la Loi is run by Sciences-Po, a French university specialized in political studies and is financed by the city of Paris. The project uses a version control system to study how the parliamentary phase impacts French legislation, and it plans to  open up its database for other researches as well as to the general public. Other projects such as Bundes-Git and Swisslaw are started by individuals. No such project received  support from legislative bodies yet.